Here's a small story that inspired me to draw this page, yesterday:

Marlon Brando won an Oscar for his performance in Godfather in 1973. Instead of appearing at the ceremony himself to receive the award, Sacheen Littlefeather represented him and instead of accepting the Oscar, she gave a small speech. This way Brando protested against the treatment of Native Americans by the film industry.
Whether or not this is the real reason behind his not accepting the Oscar, what this girl (who was/is actually a civil rights activist) did can only be admired. Imagine a Native American giving a speech in front of an audience full of whites...

I used traditional media (pencils and markers) and had some (not so) happy accidents with Brando's face. Came out too...burnt :D 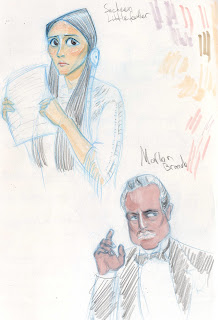 Side note: I always heard that Brando was a great actor, but i never got to see films from his young age. Here's a great piece of acting that i discovered recently from The Wild One. I don't remember seeing anything like it before: