If I was a vampire, I would probably look like this...

This image started as an idea when I saw a tutorial from a friend's ImagineFX. The tutorial was from an awesome artist called Melanie Delon, but don't find her vampire version because you'll disappointed by mine :P
Took me almost ages and an hour, but it was worth it! I feel like I could continue to the infinite refining the painting, but I guess it's time to move on to another one. 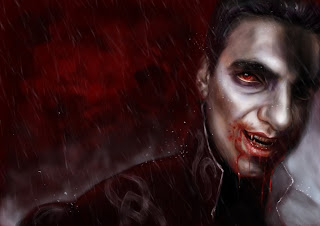 I hope you don't sit behind me during class now. Who knows what you will do to my precious, juicy neck! :O

Seriously though, thats very sweet looking colouring you have there :) And I'm amazed that you managed to capture yourself so clearly while still making you so terrifying.

Don't worry, girls should worry only ;) I'm not interested in your precious, juicy neck! :p

Yes, move on and visit your castle, here in Romania ;)) Dracula's castle :D