I've been reading theories about Pac being alive, since i started listening to his music, which was about back in '98 or so. And a few days ago that I was searching for photos to do a caricature of him, I read that he is making his appearance at 2014.
What load of BULL!! Who would be fool enough to believe that he is still alive? And if he is, why hasn't he appeared after so many years after his supposed death, back in '96?
The obvious reason behind all this conspiracy theories for 2Pac being alive, is the profit, which the people that exploit his name must be making...

I like his music because he talks about difficulties in life, and even though I don't listen to rap music so much now, sometimes I remember Pac and I put some of his music.

Anyway, it's a period now that I listen to his music, and here is some caricatures of him that I was inspired to do: 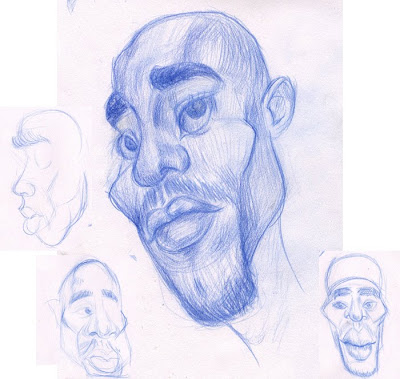 Email ThisBlogThis!Share to TwitterShare to FacebookShare to Pinterest
Ετικέτες caricatures